Kemp Woodland is 8.9 hectares of old growth Eastern White Cedar (Thuja occidentalis) that remain from a now drained swamp in Stittsville. It’s adjacent to the old railway bed that is part of the Transcanada Trail running parallel to Abbott Street East. The fact that this was a swamp probably is what saved the trees from being cut. Core samples taken from trees show many older than 150 years; one is 255 years old (230 cm in diameter) and seven more are over 170 years old. The swamp also saved these trees from the great fire that levelled Stittsville in 1870. Evidence of the swamp can be seen in deep, black, springy soil and the trees’ exposed roots; as water levels dropped, likely due to adjacent development, the soil oxidized revealing the tentacles of the root systems. Many sit over a foot in the air above the new soil line.

The woodland is also notable for its mature Yellow Birch (Betula alleghaniensis) and its wide variety of fern species. Many Jack-in-the-Pulpit and Trilliums bloom in the spring.

Kemp Woodland is a Natural Environment Area owned by the City of Ottawa.  There are no formal trails in Kemp Woodland although some rudimentary routes are marked with orange trail markers. Trees frequently come down across the routes.  Access Kemp Woodland from the Transcanada Trail either near the high school or at the other end opposite Carberry Drive.  Both entrances are near interpretive signs. 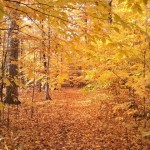 A hundred years!
All here in the garden in
these fallen leaves

The clearest way into
the Universe is through
a forest wilderness.